Georgia has fallen within the orbit of many cultural influences and empires like Iranians, Arabs, Romans, Greeks, Byzantines (also known as Eastern Roman Empire), Mongolians, Ottomans, and Russians over the years. Throughout the centuries, Georgian food has been influenced by the Mediterranean world, Arab and Mongol flavors, Persian and Ottoman kitchens, the link stretching as far as Northern India. #georgianfoodhistory

Georgia managed to incorporate all the new ingredients and meals to create an identity for Georgian cuisine. Nowadays every region of Georgia has its distinct style of food preparation like Kakhetian cuisine is considered to be a more meat-based cuisine and the region itself is called the "Region of Wine". It is also known as the birth-place of one type of Georgian bread, Tonis Puri. The same other regions of Georgia have their kind of food and style.

Today’s Georgian food and cuisine is a rich interplay between Mediterranean and Middle Eastern tastes. Georgian food and wine culture are best observed through Supra “The Feast” – traditional feast featuring a wide array of assortment of dishes always accompanied by large amounts of wine, lasting several hours. Georgian cuisines have something for everyone, there are so many traditional Georgian foods and dishes unique to Georgia.

You can try all these Georgian foods in Machakhela (Samikitno) Restaurant (Biggest Food Chain of Georgian Restaurant in Georgia), Pasanauri Restaurant, Khinkali House and Chashnagiri Restaurant. 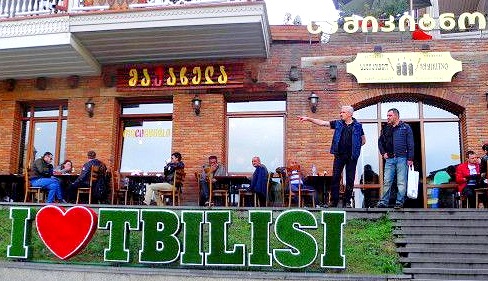 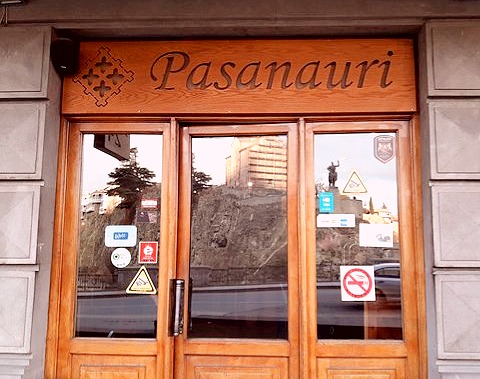 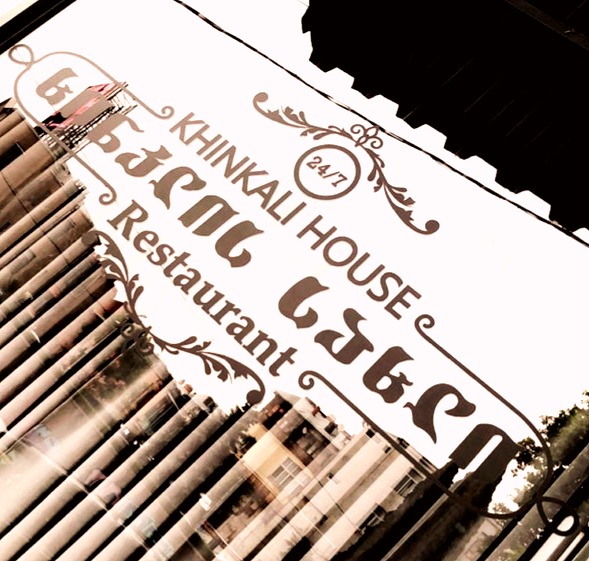 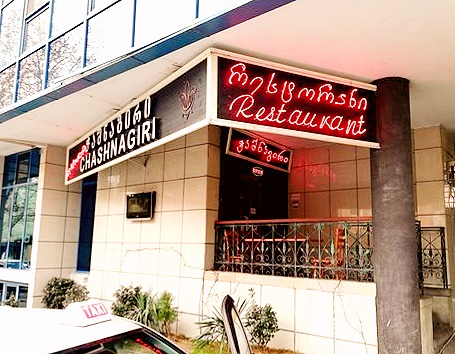 Machakhela is most famous in tourists as it is easy to locate almost anywhere in Tbilisi but quality-wise all the other three are the best. If anyone specifically looking for Halal Georgian Food then try at Seidabadi Restaurant Tbilisi.

Khachapuri, Georgian cheese bread or cheese pie, it is traditionally topped with melted cheese, eggs, and butter. There are multiple versions of this tasty treat, as they are region-specific. It forms, as well as texture varies from region to region, it can take a thin or thick crust, it can contain single or many layers, Khachapuri can assume round, triangle or rectangle form of all sizes and even come boat-shaped with an egg in the middle, as is the case of Khachapuri from Adjara – Georgia’s coastal region on the Black Sea. #typesofkhachapuri

Although it is considered a snack, khachapuri can often be consumed as a full meal. It can also be bought at numerous kiosks located alongside Georgian roads. Some of the most popular Khachapuri’s are as following:

One of the most popular khachapuri varieties, Adjarian is an open-faced pie that is filled with a combination of cheese and eggs. The base is made from yeasted dough that is rolled into an oblong shape and traditionally comes filled with Sulguni or Imeretian cheese, or the combination of both. #acharuli

The dish is finished off with an egg that is placed on top, and the pie is then additionally baked until the egg is partially set. This boat-shaped pie hails from the coastal Adjaria region, and it is usually served with a slice of butter on top. #acharulikhachapuri

quite similar to its Imeretian cousin, this khachapuri is round and it's topped with even more cheese (Mostly Imeretian cheese). #megrulikhachapuri

The dough is prepared with flour, water, yeast, sugar, and salt. Once it has risen, the dough is topped with a combination of eggs and cheese, then baked until the cheese becomes bubbly and golden brown. Before serving, this khachapuri variety can be rubbed with butter, if desired. #megruli

Imeruli khachapuri is a traditional Georgian bread filled with melted cheese. Unlike traditional khachapuris, the Imeruli variety is circular. The dough consists of flour, salt, sugar, yeast, water, and sometimes yogurt, while the cheese filling is usually enriched with the addition of eggs. #imerulikhachapuri

Penovani Khachapuri is a Georgian khachapuri variety originating from Samtskhe-Javakheti. To prepare it, a combination of Imeruli and Sulguni cheese is grated and combined with egg yolks. The mixture is placed on a piece of puff pastry that's folded into triangles or squares.

Before baking, each khachapuri is brushed with a mix of egg yolks and milk. These tasty small pies are ready for consumption after they puff up in the oven and become golden brown. This khachapuri variety is the easiest, speediest, and simplest to make of all the khachapuri versions. #penovani #penovanikhachapuri

This khachapuri variety hails from Guria, a province in the west of Georgia. Unlike other khachapuri pies, this one is crescent-shaped and it's prepared for Orthodox Christmas. The dough is filled with a combination of grated cheese and hard-boiled eggs before it's baked until golden brown. #guruligvezeli

The shape of this pie was associated with celestial bodies, and for ancient Gurians it was a symbol of strength, so nowadays there is a superstitious belief that each family member should get at least one Gurian khachapuri during the festive Christmas season.

There are more two types of Khachapuri, Ossetian Khachapuri (Osuri Khachapuri) and Svaneti Khachapuri. These two are not easy to find in Tbilisi, all above are the famous one and easy to find at bakeries on the street of Tbilisi also.

A popular Khinkali (Georgian Dumplings), a key element of a Georgian feast is made with a variety of fillings. Traditional Khinkali typically made of meat but vegetarian Khinkali (mushrooms, potatoes, cheese is used instead of meat) is also available in restaurants. In the mountains, this much-praised dish is made with lamb, which comes in abundance, elsewhere, a mixture of minced beef and pork is used. The origins of Khinkali can’t precisely be traced; some accounts point to Tatar's influence, others claim khinkali to be an indigenous product of Georgia’s primordial mountain culture.

The most frequent variety (often served in Georgian Restaurants) throughout entire Georgia is a mixture of pork and beef. The meat for khinkali is never precooked – therefore, all of the juices are tucked inside the dumplings. Eating khinkali is also a part of traditional Georgian folklore: the top, where the dough is twisted into a knot, should never be eaten because it serves as a handle to hold the dumpling, and it is usually left on the plate as an indication of how many dumplings have been eaten. #khinkali

Note: At restaurants, you have to order at least five or more Khinkali’s, and you can’t mix and match the varieties. The good news is that they’re not expensive – expect to pay around $0.35 per Khinkali. #georgiandumplings

Nadugi is one of the most outstanding appetizers, it’s the king of cold appetizers. It is soft cottage cheese, similar to Italian Ricotta Cheese.

It looks like a cone of ice cream but Nadugi is a snack in the shape of a cone, made of thin Sulguni cheese (one type of Georgian cheese, mild, elastic cheese with layers, similar to Italian mozzarella) flat cakes with the filling of Nadugi (Ricotta), light milk product with a delicate taste of cream and mint. #ricottacornets

Mtsvadi is skewered meat, cooked over an open fire. Mtsvadi also known as Shashlik or Shashlyk, Shashlik was originally made of lamb but nowadays it is also made of pork, beef, or venison, depending on local preferences and religious observances. It’s a traditional Georgian barbecue tossed with raw onions and finished with freshly squeezed pomegranate juice. Sometimes it’s also served with sour plum sauce or wrapped in thin bread. #mtsvadi #shashlik

While it is not unusual to see shashlik today listed on the menu of restaurants, it is more commonly sold in many areas in the form of fast food by street vendors who roast the skewers on a mangal over wood, charcoal, or coal. It is also cooked in outdoor environments during social gatherings, similar to barbecue. #georgianbarbecue

It’s like a Georgian Snack, wonderful taste of mushroom with cheese, and very easy to cook in a few minutes. The dish consists of baked mushrooms which can be either plain or filled with butter and Georgian Sulguni cheese, seasoned with black pepper, and sometimes a bit of garlic. #sokokecze

Shkmeruli (chicken cooked in milk and garlic sauce) is one of the very favorite dishes of the country of Georgia it is a very old Rachan dish and it is one of the most popular dishes in Georgian restaurants. It has to be noted that the name derives from one of the villages in the Racha region of Georgia, Shkmeri, which is said to be the place where this food has originated. It has very few ingredients, which are traditionally combined and baked in traditional Georgian red clay baking dish, or ketsi. #shkmeruli

While the whole recipe is relatively simple, after tasting it, it is very clear that sometimes less is better. The rich flavor of crispy roasted chicken paired with the creamy garlic sauce is just perfect.

The Georgian dish Shkmeruli appeared on the menu of one of the Japanese major restaurant chain Matsuya. Initially, Georgian dish was available in approximately 70 restaurants of the chain, but it gained popularity, and from January 2020, Shkmeruli is present in almost all Matsuya restaurants.